Disneyland in Anaheim, California, the phrase “In God We Trust” added to all currency and Rosa Parks arrested for refusing to give up her seat on a bus in Montgomery. It was also the year that artist, professor and inventor Virginia Myers first stepped off the train in Iowa City.

Originally from Cleveland, and having completed a Master of Fine Arts from the California College of Arts and Crafts, she returned to the Midwest for further graduate study in Urbana, then Iowa City. She landed with no place to stay and only $150 to her name, but she had a dream of continuing her artistic study in printmaking with renowned artist Mauricio Lasansky.

As an undergraduate and graduate student, she was concerned with her proficiency in drawing and was told to take up Printmaking as a way to sharpen her skills. She enrolled in a few classes learning from Lasansky and also studied painting with Professor Eugene Ludins.

Myers freelanced as a framer (using a miter saw borrowed from the school) and made enough money to get by until, one day, she had what would prove to be a fateful conversation with Ludins. As they conversed about framing, Ludins told her that he used to be a framer and that, if she wanted, he would teach her how to silver leaf the frames she was making, giving her an instant niche that no one in the area could compete with. This became her first artistic interaction with shiny surfaces, an interest that still excites her to this day.

Myers studied at University of Iowa for six years as a post-graduate. During that time she became Lasansky’s research assistant and sharpened her skill with burin engraving and intaglio. In 1961, Myers was awarded a Fulbright to Paris, where she studied at Atelier 17 with Stanley William Hayter. In 1962 she returned to Iowa City, this time as a printmaking instructor for the university.

She continued to make work and gradually began thinking about how one might print onto the silver leaf that she was using for her frames. Years were spent pioneering a technique to leaf a sheet of paper and run it through a press so the image from a plate would transfer onto the leafed surface. Eventually, this technique was perfected and the reproduction of numbered prints, each one identical to the next, became a reality.

Having created her own printmaking technique, she began to write a book illustrating to others how they could achieve the same results. But, there was something missing, a problem she realized that printing on a piece of silver leafed paper couldn’t solve: how to achieve a mirrored surface within the print.

A piece of inspiration came when she thought, “What is this shiny stuff you see on Christmas cards and ads?”

That shiny stuff ended up being commercially printed hot stamp foil. After talking to a friend in the commercial printing industry, Myers was sent a packet of foil cards that held samples of every type of foil imaginable, “There were ten kinds of silver, ten kinds of gold. Some had mirrored surfaces and some had a matte surface.” Enticed by the samples, she attended a conference for the printing industry to have all of her questions answered and, in the mid 1980s, she began experimenting with foil in her work.

The foil adhered better if it was heated from both the bottom and the top, she found. With that, she had identified the guiding principle of what would become the Iowa Foil Printer, which Myers is credited with inventing in 1986.

The IFP, as it is commonly referred to, has a heated roller coupled with an intricate electrical system that tempers heat to the roller. Pieces of foil are placed on acrylic-prepared paper, which are then laid on top of an electronic, thermo regulated hotplate and adhered with even pressure as the IFP is rolled back and forth across the print. A work in progress to this day, the newest model of the IFP is slated to come out later this year.

UI began to offer a class in foil imaging in the spring semester of 1990, through which Myers and her students continued to experiment with these new techniques.

She credits her students for as much or more of the advancement in the technique as herself and she includes many examples of student work in her text, Foil Imaging: A New Art Form (Virginia A. Myers, 2001).

In addition to the courses offered during the school year, she offers an intensive summer workshop in foil imaging that will enter its 21st year this summer.

For 56 years Virginia Myers has been a part of Iowa City and has made great contributions to both the local art scene as well as the medium of printmaking. In creating a new technique, she has left an everlasting legacy to the storied ladder of UI’s department of art, but she was brought here with only the hope of studying with Mauricio Lasansky. “If he had been someplace else, I would have gone there.” Luckily for us, she came to Iowa City.

Reflecting on her time here, a big smile comes across her face and she simply states, “it was beyond golden.”

The real legacy she is building will live on long after she retires from teaching. She holds nothing back from her students, eager to teach them everything she knows and she is quick to give them all the credit, “I learn more from them than they’ll ever learn from me. They think I’m kidding, but that’s not true. Not true at all.” 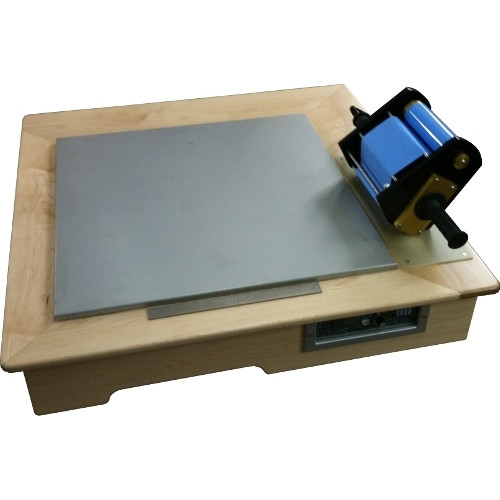 printmakers to control and execute the entire process of creating foil-stamping prints or other art works from beginning to end. The IFP performs as a safe, non-intimidating device that allows one artist, working alone, to execute the entire hot foil stamping process from beginning to end. A specially designed wooden frame provides support for large sheets of paper beyond the dimension of the hot plate. Heat for both the hot plate and the printer roller may be precisely controlled.

The IFP allows the artist exclusive control over the three basic principles of foil stamping. These principles are heat, pressure, and dwell time. Most varieties of foil available for use on paper substrates may be stamped and adhered at 200 degrees Fahrenheit or less using the IFP. The Iowa Foil Printer gives to artists the ability to create fine art with an extraordinary palette of roll leaf foil.

Foil imaging is a revolutionary printmaking technique developed at the University of Iowa by Professor Virginia A. Myers. Hot-stamped foil is a process of applying foil or roll-leaf using a combination of heat, pressure,and dwell time to adhere the foil to a wide variety of substrates, including but not limited to paper, metal, leather, or plastics. The foil or roll leaf is adhered to a plastic film which is then transferred to the substrate during the printing process. The foil is manufactured in a rainbow of metallics, pigments, pearl-escents, tin-foils, and specialty products including holograms.